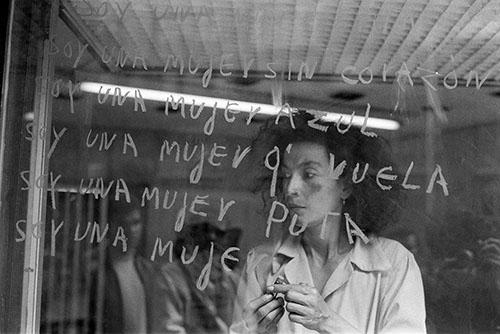 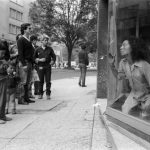 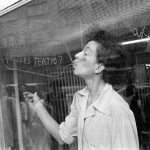 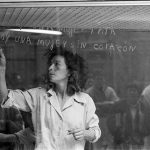 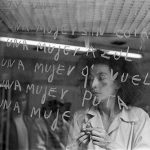 Vitrina was completed in downtown Bogotá in 1989. For eight hours a day, which by law make up a full working day, the artist completed cleaning duties in front this typical showcase. The glass that separated the private sphere from the public served, simultaneously, as a protective barrier and a screen. Hincapié’s movements were marked by functional gestures: soaping, rinsing, sweeping and writing. Her intimate monologue was transmitted through the glass using a blood-red lipstick, graffitis of an alienated seduction that manifested the tensions of the psychological, political and social violence practiced daily on the female identity.

María Teresa Hincapié (1956-2008) was a Colombian pioneer of performance in her country and, without a doubt, one of the most influential in Latin America. She began her artistic career involved with theater and was part of the group “Acto Latino” from which she developed her own dance-theater-ritual inspired by oriental techniques. After traveling through Mexico, Europe and Asia, Hincapié returned to Colombia and began a search for alternative spaces for her artistic expressions. At that time, she was linked with artists such as Doris Salcedo, José Alejandro Restrepo, and Álvaro Restrepo. Her version of Desde la huerta de los mudos (1986), a tribute to Federico García Lorca that she made in collaboration with Álvaro Restrepo, marked the beginning of the fusion between theater and visual arts that the artist developed throughout her work . A year later, a work by the artist José Alejandro Restrepo was introduced in the field of performance based on Parquedades (1987), which completely removed it from the theatrical forms and from the conventional notion of ‘spectacle’.

Hincapié has addressed issues related to the feminine condition, domestic daily life and motherhood in her work. From a rigorous handling of the body and a great sense of space intervened, time is one of the crucial aspects of her work. The detained and tense rhythms of her presentations create an atmosphere that is in many cases oppressive and openly critical of certain circumstances of social and sexual alienation. Hincapié performed actions that took physical effort to limits that revealed pain as an intimate and universal expression.

The Colombian artist won the first prize at the XXXIII National Salon of Artists of Colombia in 1990 with the work Una cosa es una cosa, a plastic action that took her 12 hours and which placed her in the annals of Colombian art. And for the second time in 1996 for the work Divine proportion. She has also participated in international exhibitions and fairs such as I Bienal de Valencia – The Body of Art Biennial of Valencia (2001), 51 International Art Exhibition – Always a little further, La Biennale di Venecia (2005), and 27th Bienal de São Paulo (2006), among others.